Download the comprehensive GECKO Messenger, the quick reference GEC-KO on the run. Access an education module on MS with case-based learning here.

Bottom line:  There is a well-recognized genetic contribution to the development of multiple sclerosis (MS). The risk of MS to first-degree family members of an affected individual is between 3 and 5%.  This recurrence risk increases with the number of affected relatives in the family and the degree of relationship between them. Despite this, no single gene mutation is known to cause MS. Recent genetic studies have identified dozens of genes which collectively contribute small effects to MS risk. The frequency of MS-variant genes in the general population limits the value of genetic testing which does not contribute to prognosis or management. Genetic testing for MS is not available in Canada. It is important to recognize that genetic testing may be available for certain conditions with overlapping symptoms to MS (MS mimics) and in these instances testing may aid accurate diagnosis. Disease-modifying treatments (DMT) are part of standard care for individuals with MS. They are not recommended during pregnancy or breastfeeding though evidence of teratogenicity has not been convincingly established to date.

What is Multiple Sclerosis?

Multiple sclerosis (MS) is a demyelinating condition of the central nervous system (CNS) that affects 1 in 500 Canadians1. It is characterized by inflammation and axonal degeneration within the CNS. Symptoms include numbness or tingling, visual disturbances, difficulty walking, and fatigue1. First symptoms typically present between age 20 and 40 years but can appear at any age. MS affects women 2-3 times more often than men. The most common course of disease is marked by relapse into symptoms followed by periods of remission1.

The role of genetics in MS risk was established with the study of recurrence risks within families2-6.  First degree relatives of individuals with MS have a 3-5% chance to develop MS in their lifetime.  This is 15 to 25 times higher than the population prevalence. Chance for relatives to develop MS increases with the number of affected family members and the degree of relationship between them. The risk for the monozygotic twins of an individual with MS approaches 30%2 and illustrates the effects of increased genetic sharing and common in utero environment3.  Studies of adoptees, step-siblings and spousal controls show no increased MS risk over the population prevalence suggesting that the shared familial micro- environment (i.e. household) is not a significant risk factor4-6.

The HLA DRB1 gene, lying within the major histocompatibility complex, has consistently been associated with MS. This gene functions within the immune system to distinguish self from foreign antigen7.  The HLA DRB1*1501 variant of this gene is found two to three times more often in those with MS than in unaffected controls8.  Recently, dozens of genes with odds ratios of less than 1.2 have been identified which collectively contribute small effects to overall MS risk9,10. The vast majority of these susceptibility variants have an immune-related function10.  It is important to note that these variants are commonly found in healthy controls.

Medical management is usually performed by specialists in the field of MS.  Disease-modifying treatments (e.g. interferonB-1b) have been shown to reduce the number of relapses and slow progression of the disease.  Symptom-specific medications (e.g. for pain or bladder dysfunction) as well as relapse treatments (typically steroids) are often used for management. Vitamin D supplementation is also recommended.

Most of the time, a diagnosis of MS is not a strong indicator to refer for genetic assessment.  Discussions of recurrence risks, psychosocial needs and medication safety during child-bearing years can be initiated with primary health care providers or neurologists.  Genetic testing is not available for diagnostic, predictive or prenatal purposes. However, referral to Genetic or Metabolic specialists should be considered for individuals who:

Have MRI findings atypical for MS

Develop atypical symptoms such as migraine or dementia which may indicate the need to rule out other disease (e.g. inherited arteriopathy or leukoencephalopathy)

Any of the above may indicate a rare form of demyelinating disease12, some of which are caused by a single gene mutation.  Genetic testing may be available in these instances and genetic counselling should be provided to advise of screening for family members at risk and to discuss family planning options.

It is important to recognize that genetic testing may be available for certain conditions with overlapping symptoms to MS (see Table 1) and in these instances testing may aid accurate diagnosis.

Table 1. Disease that may mimic the appearance of MS on MRI12. 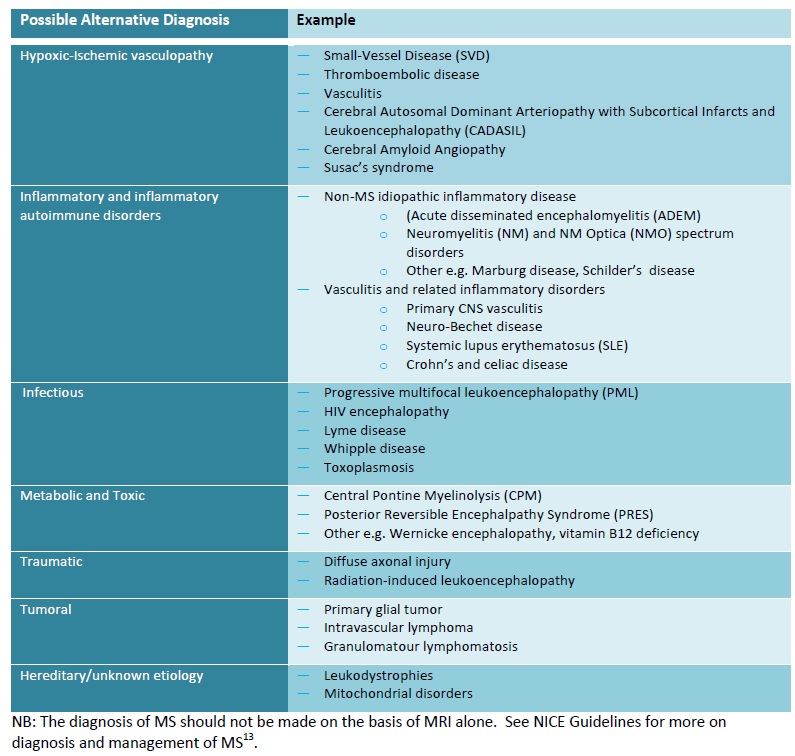 What does the genetic test result mean?

Testing for the multiple sclerosis susceptibility gene variants is not currently offered, or recommended. The frequency of MS-variant genes in the general population limits the value of genetic testing which would not contribute to prediction of risk, prognosis or management. As more variants are studied, testing may be indicated to determine which persons respond to different treatment options but this is not the case at present.

Are there harms or limitations of genetic testing?

Genetic testing is not clinically available for multiple sclerosis. For people who present with results obtained through private-pay direct-to-consumer testing, interpretation is not straightforward as each risk variant confers such a small effect on genetic predisposition. Some people with MS have few or none of these susceptibility variants and conversely, most people found to carry these variants will never develop MS.

Are there risks associated with multiple sclerosis treatment and pregnancy or breast feeding?

Limited studies on the safety of disease-modifying treatments for MS during pregnancy and breastfeeding have not demonstrated risk for congenital malformation. However, the current recommendation remains to stop the use of DMT during pregnancy and lactation. Relapse rates are naturally suppressed by pregnancy in many women but may increase post-partum.

Some medications, such as chemotherapy used to treat aggressive forms of MS, are contraindicated during pregnancy and breastfeeding and may reduce chances of becoming pregnant in the future. Each symptom-specific treatment should be assessed for safety in women who may become pregnant. Your local genetics centre and the Motherisk program at The Hospital for Sick Children are good resources to determine the safety of medication during pregnancy and breastfeeding. Affected women and their partners are encouraged to discuss family planning with all prescribing physicians involved in their care.

See www.geneticseducation.ca for how to connect to your local genetics centre.

Resources for patients and the public

Multiple Sclerorsis Society of Canada The MS Society provides services to people with multiple sclerosis and their families and funds research to find the cause and cure for this disease.

GEC-KO Messenger is for educational purposes only and should not be used as a substitute for clinical judgement.  GEC-KO aims to aid the practicing clinician by providing informed opinions regarding genetic services that have been developed in a rigorous and evidence-based manner. Physicians must use their own clinical judgement in addition to published articles and the information presented herein. GEC-KO assumes no responsibility or liability resulting from the use of information contained herein.


Subscribe to our updates and be the first to know about new GEC-KO resources.