Download the comprehensive GEC-KO Messenger. For a more concise summary view the GEC-KO on the run. View the point of care tool to assist in identifying patients most likely to benefit from referral to genetics.

Epilepsy is a chronic brain disease that is characterized by an enduring predisposition to recurrent unprovoked epileptic seizures. A single gene mutation causes epilepsy in about 30% of affected individuals.1 Genetic testing should be considered for individuals with red flags, including: epilepsy with accompanying dysmorphic features, intellectual disability, autism and/or cognitive regression; drug-refractory epilepsy; epilepsy with multiple neurological co-morbidities; or a positive family history. Consultation with an epileptologist and/or a clinical or biochemical geneticist may be warranted. Genetic testing may provide a specific diagnosis for the individual with epilepsy and may end the diagnostic odyssey. This may help to guide management, provide information on prognosis and more accurate recurrence risk counselling, and provide prenatal testing options.  Importantly, a molecular diagnosis may bring closure for the family and help them to network with support groups.

Epilepsy is a chronic brain disease that is characterized by an enduring predisposition to recurrent unprovoked epileptic seizures. Epilepsy is diagnosed when an individual has: 1) ≥ two unprovoked or reflex seizures (seizures that are consistently induced by a specific stimulus or trigger) more than 24 hours apart, 2) one unprovoked or reflex seizure and a high probability of having another seizure (e.g. a child with Sturge-Weber syndrome presenting with a first seizure) or 3) a recognizable epilepsy syndrome (e.g. an individual with a characteristic history and clinical presentation plus EEG findings consistent with a condition such as West syndrome).

How common is epilepsy?

Epilepsy is the second most common neurological condition. A recent meta-analysis reported the prevalence of active epilepsy as 6.38 per 1000 persons.2

What do I need to know about the genetics of epilepsy?

Epilepsy is best described as a group of conditions. Not all epilepsies are genetic in origin. Most commonly, a complex combination of genetic and non-genetic factors leads to a seizure disorder, with a genetic contribution estimated to be present in up to 70% of affected persons. For this reason, twins and first degree relatives of affected persons are at increased risk for epilepsy.3 Only a fraction of the epilepsies as a whole can be explained by monogenic inheritance, with epilepsy due to a mutation in a single gene that can be detected by genetic testing occurring in about 30% of affected individuals. Certain types of epilepsy have a high likelihood of a genetic etiology. These include:

How is epilepsy usually evaluated?

Detailed clinical evaluation is the first step. The electroencephalogram [EEG] is universally used as a diagnostic measure in epilepsy. Investigations like video-EEG and brain MRI are usually indicated where the etiology is uncertain, the seizures focal or prolonged, or the affected individual is refractory to antiepileptic drugs. 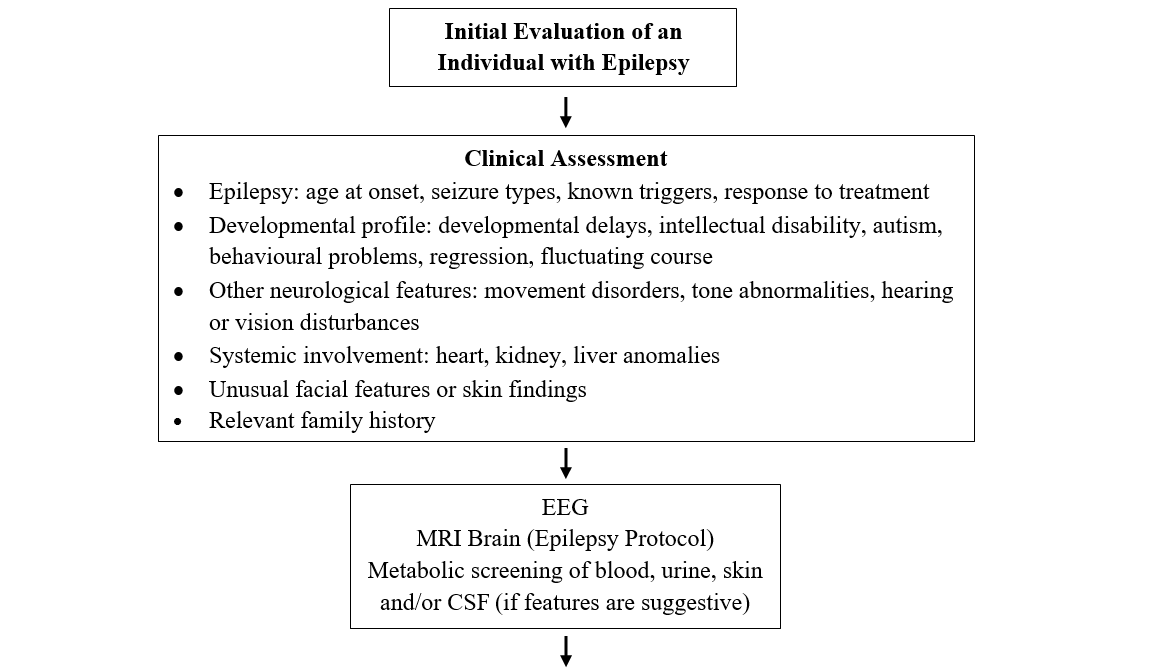 What can my patient expect at a genetics consultation for epilepsy?

A geneticist will perform a detailed clinical evaluation, including taking details of seizures/epilepsy and developmental profile, looking for associated neurological and other systemic co-morbidities or dysmorphisms, and taking a 3-generation family history.

A decision will be made about genetic testing. If testing is appropriate, the benefits, risks and limitations of the genetic testing chosen will be reviewed.  Testing can detect several different types of genomic variation. Single nucleotide variants or very small insertions and deletions can be evaluated by traditional or next-generation sequencing methods. Larger pieces of missing genetic code (microdeletions/microduplications) could be evaluated using microarray. Still larger duplications or deletions, some of which lead to formation of a ring chromosome, can be detected by a karyotype. There are additional tests which assess gene activation or inactivation by methylation (e.g. Angelman syndrome) or the presence of expanded repeat segments of code, (e.g. Fragile X syndrome). If a single gene is suspected (e.g. SCN1A), testing of either that gene or a panel of genes could be initiated. The choice of genetic test will depend on the clinical evaluation.7 Please refer to the Genetics Education Canada Knowledge Organization (GEC-KO) glossary for more information about the tests and disorders listed above.

What do the genetic test results mean?

A positive result confirms the diagnosis of a genetic disorder.  However, variable expressivity and incomplete penetrance (see later) must be kept in mind. This result may have significant implications for treatment considerations, surveillance, further management and counselling of specific recurrence risks.

A negative result does not rule out the diagnosis of a genetic disorder. It just implies that the specific test did not pick up a particular genetic abnormality in that individual. Epilepsy syndromes show extensive genetic heterogeneity, and a negative test for a given gene/gene panel does not mean the person does not have the condition. Better epilepsy phenotyping, selection of appropriate genetic test or panel may be warranted.

Frequently, the test results indicate a variant of unknown significance (VUS). This means that the variant is not known to be pathogenic or ‘disease-causing’ based on current knowledge. Nor is the VUS considered to be benign. These variants may not have been reported and/or functionally characterized. They do not diagnose or rule out any particular genetic condition. Further testing of the parents or other affected family members may be requested to clarify the interpretation of these variants.

How do I order genetic testing?

A detailed clinical evaluation is a mandatory pre-requisite. If the epilepsy is uncontrolled, referral to, or consultation with, a District or Regional Epilepsy Centre is recommended. If epilepsy is well controlled, or if there are dysmorphic features, referral to a clinical geneticist is recommended. If there is developmental regression or other clinical features suggestive of an inborn error of metabolism, consultation with a biochemical geneticist or a physician with training in inherited metabolic disorders is strongly recommended. Refer to the ‘Red Flags for epilepsy with a possible genetic cause’ box above.7

Individuals with the following types of epilepsy do not require genetic testing:

Where do I refer my patient?

Find the contact information for your local genetics centre here. If you are in Ontario, information for referral pathways to your District or Regional Epilepsy Centre can be found in reference 8.  Do not hesitate to call and ask to speak to a genetic counsellor or geneticist prior to referral if you have questions. They can also help you determine the ordering requirements of your local laboratory (there are typically specific requisitions for genetic testing, and some labs have restrictions on who can order these tests). For the most meaningful appointment and appropriate triaging, it is important to include any previous investigations and consultation notes (e.g. genetic test results, psychological assessments, brain imaging) along with your referral.

For community support and research opportunities for the affected person and their family, see Canadian Epilepsy Alliance.

What are the benefits of genetic consultation (with or without genetic testing)?

Genetic testing may provide a specific diagnosis and may end the diagnostic odyssey. Further benefits may include:

Targeted treatment: Sometimes, the results of genetic testing may influence the ongoing treatment of seizures. For example, individuals with GLUT1 deficiency syndrome benefit from a ketogenic diet, avoidance of sodium channel blockers will help in Dravet syndrome, and there are various vitamin-responsive epilepsies.9

Appropriate surveillance: Depending on the gene and the expected inheritance, ‘at risk’ family members can be screened for the same gene mutation.

Information on natural history: Once a genetic diagnosis is obtained, a more specific prognosis, with regard to epilepsy and other neurological co-morbidities, can be explained to the affected person or their parents. Focused systemic surveillance measures may be initiated. For example, a diagnosis of Tuberous Sclerosis will lead to recommendations for periodic surveillance for brain, kidney, and heart tumours.

Recurrence risk counselling can be more accurate once the gene involved and the mode of inheritance are known. Options for prenatal diagnosis in future pregnancies may be discussed. In the absence of a molecular diagnosis, recurrence risk counselling based solely on empiric risks can be provided to at-risk individuals (e.g. a first degree relative of the affected person).

A genetic diagnosis may also help the family to network with support groups and research collaborations.

Genetic consultation may also be valuable even in absence of genetic testing. It may provide the affected person/family more information about the disease under consideration, short and long term psychosocial support, and help to formulate future goals and facilitate family communication.

What are the limitations and complexities of genetic testing for epilepsy?

Uninformative results: Frequently, the genetic tests identify variants which cannot be clearly classified as pathogenic or ‘disease-causing’. They may have not been reported and/or functionally characterized. These are called “variants of unknown significance”. They do not diagnose or rule out any particular genetic condition.

Genetic heterogeneity: A broad epilepsy group may have a number of causative genes. For example, a progressive myoclonic epilepsy phenotype may be caused by mutations in genes CSTB, EPM2A, KCNC1, PPT1, TPP1, etc.

Variable expressivity: The same gene mutation may result in very different clinical phenotypes. The severity of epilepsy may be very variable. For example, missense mutations in SCN1A can present as simple febrile seizures, febrile seizure plus, or Dravet syndrome.10

Incomplete penetrance: Some individuals who carry a gene mutation may never develop symptoms of the disease. For example, a missense mutation in SCN1A has 60-70% penetrance.

A genetic diagnosis may direct the testing of “at-risk” family members. It may also provide information about the natural history of the epilepsy syndrome, response to specific drugs, associated neurological and other systemic co-morbidities, and prognosis. This may guide the clinical and investigation-based follow up.

Women with epilepsy can be made aware of the risks associated with certain anti-epileptic medication (for example, valproic acid), the likelihood the medication will cause congenital anomalies or intellectual disability, and risks related to breast feeding.11

Canadian Epilepsy Alliance: a Canada-wide network of grassroots organizations dedicated to the promotion of independence and quality of life for people with epilepsy and their families, through support services, information, and public awareness.

GEC-KO Messenger is for educational purposes only and should not be used as a substitute for clinical judgement.  GEC-KO aims to aid the practicing clinician by providing informed opinions regarding genetic services that have been developed in a rigorous and evidence-based manner. Physicians must use their own clinical judgment in addition to published articles and the information presented herein. GEC-KO assumes no responsibility or liability resulting from the use of information contained herein.


Subscribe to our updates and be the first to know about new GEC-KO resources.